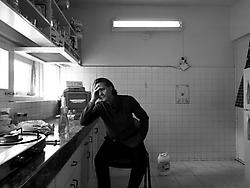 In 1982, during the heyday of the New York East Village scene, artist Peter Nagy founded Nature Morte Gallery with Alan Belcher. Along with Pat Hearn Gallery, International with Monument, Jay Gorney Modern Art, and American Fine Arts, Nature Morte spearheaded a movement in practice identified with Postmodernism and Postconceptual strategies; this influence is still being felt today. Nagy and Belcher ran the gallery in the East Village for six years, until 1988.

In 1992 Nagy moved to India, and in November 1997 he restarted Nature Morte in New Delhi. The gallery was located at a number of different spaces during its first five years there. In 1999, Nagy started working with New York-based Indian gallery Bose Pacia. He contributed catalog essays and curated summer shows until they formalized their relationship in 2003. Soon after, Nagy opened a permanent space, Nature Morte (in partnership with Bose Bacia) in Delhi, and in 2008 Nagy opened a branch in Berlin.

RUPERT GOLDSWORTHY: Peter, how did you open the Nature Morte Gallery?

PETER NAGY: I founded Nature Morte in New York in May 1982 [with Alan Belcher] and ran it there for six years [it closed in July 1988]. I moved to India in 1992 and started Nature Morte there in November 1997. I used four different spaces in the first five years of the gallery there. I started working with Bose Pacia-writing catalog essays, curating summer shows-in 1999 and we formally teamed up in 2003, enabling me to open the permanent space we still have in Delhi in December 2003, with my second solo exhibition of Subodh Gupta's works in New Delhi.

GOLDSWORTHY: In 2008 you opened a space in Berlin. What prompted you to add Berlin to your itinerary?

NAGY: We first started thinking about a European branch of the gallery in 2006. We were doing a lot of art fairs and had strong interest in Indian art from European collectors. Berlin seemed like the best opportunity because it is both a contemporary art hub and extremely affordable compared with other European cities. We opened Nature Morte Berlin in November 2008 with a show of photographs by Dayanita Singh.

GOLDSWORTHY: How do you find the audience and response vary between showing Indian art in Germany and New York?

NAGY: Unfortunately, contemporary art from India still hasn't entered the mainstream market or dialogue in the United States. The market for it there still remains almost entirely NRIs (Non-Resident Indians, as we say). India is still too remote for most American collectors to relate to, although of course there are always exceptions. But the mainstream European art world has become quite involved with Indian art, as they have a much closer and older relationship with the sub-continent. There have been many large survey exhibitions of Indian contemporary art in museums all over Europe and these greatly influence the collectors and the gallerists.

GOLDSWORTHY: Your first show in Berlin was the work of Dayanita Singh who has seen institutional success in Europe-and on the East Coast of the US. Are there particular genres or subjects by Indian artists that Europeans show greater interest in? Is it the more "identity-related" work, or post-colonial themes?

NAGY: Most of the Western curators are looking for a type of art coming out of India that corresponds to what is considered "progressive" art practice in the West itself. They are able to find such works in the practice of artists such as the Raqs Media Collective, Bharti Kher, Anita Dube, Amar Kanwar, Jitish Kallat, Sonia Khuranna, and others. Unfortunately, these curators (and also critics and gallerists) often approach Indian contemporary art with very little knowledge of India itself, so they tend to misinterpret or even ignore artists that may have great relevance to the Indian context but seemingly little to the international context. But, hey, cultural translation is one of the obvious pitfalls of the globalization of the contemporary art world.

GOLDSWORTHY: Are you also working with Berlin-based Indian artists who are NRIs?

NAGY: We primarily represent artists who live and work inside of India, though we do represent a few diasporics (such as Seher Shah and Bari Kumar, both of whom live in the US). We also do projects with international (read: not Indian in any way) artists, but these are one-off exhibitions and we can't represent such artists. In Berlin, we are trying to mix things up, so that it is a more vibrant context, which the Indian artists themselves appreciate. In June, we are doing a show with the Berlin-based artist Julia Staszak (a hybrid project where she creates an installation to house other artists' works) and we have done a solo show with the American painter Stephen Mueller. But our concentration will always be on Indian artists.

GOLDSWORTHY: Nature Morte began as one of a group of 1980s East Village artist-run galleries now lionized for its organization and history. And NM is one of the last remaining names from that group, although it exists in a very different context now. Is there now or has there been a similar type of artist-run/alternative gallery movement in Indian cities that you find interesting?

NAGY: Hardly at all. There have been a few "collective" organizations that mount art exhibitions (such as Open Circle in Mumbai and SAHMAT in Delhi) but they don't run a permanent space. The only thing that comes close is the Khoj Residency Workshop in Delhi, which is part of the Triangle Arts Trust and under the leadership of Pooja Sood (a critic/curator, not an artist), and which runs a permanent building that sponsors residency projects resulting in exhibitions, and mixes Indian artists with international artists who come to Delhi. It is India's one true "underground" art space.

GOLDSWORTHY: How do you see the future of Indian art emerging in relation to the global market?

NAGY: I think Indian art has much greater "legs" on the international scene than, say, Chinese contemporary art. Of course, I'm biased. There is an astounding diversity in the art practices in India today. This diversity reflects the diversity of the country itself but also means there's something for everyone. Almost all of the artists are fluent in English and the art world is conducted almost entirely in English, which gives the Indian artists greater access to the international art world but also enables a more immediate and satisfying encounter for people coming to India.