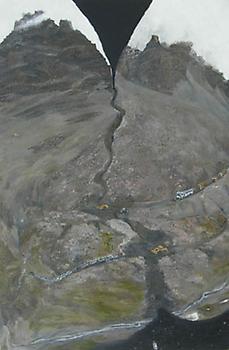 Exhibition of new paintings by Ramakrishna Behera, the self taught artist from Orissa. The paintings of Ramakrishna Behera are most certainly landscapes and are inspired by real places: the caves of Ajanta, the mountains and monasteries of Ladakh, the countryside of Orissa and even the interior of the artist's home. Yet the works employ distorted perspectives and fold in images of outer space to become something more like psychological maps or hallucinatory visions. While their palette of colors is realistic, their spaces certainly are not. The surfaces of his paintings are buttery and their details are seemingly coaxed spontaneously from their making.