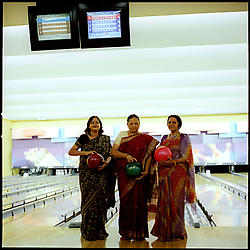 Johann Rousselot discovered India when he was doing press reportages, and he immediately decided to draw comparisons between the slogan « India Shining » - launched by the BJP, the nationalist Indian party that was in power until 2004 – and the real state of the country. He was so fascinated by India that he stayed for several months, immersing himself in a search for the true significance of those two words, and he very swiftly found the tangible evidence and the gaping holes. Riding his motorbike – a magnificent black Royal Enfield Bullet – this sharp and dauntless observer moves smoothly from the chic nightclubs of Colaba through the building sites of the new towns to the territories of the Adivasi in Orissa, Jharkhand and Chhattisgarh. From this long exploration of the different urban, rural and social landscapes of the Indian society, he has assembled a collection of precise and well-composed images in which generosity of spirit, engagement and derision frequently vie for pride of place.
Alain Willaume
In "India Now, New Visions in India",
Thames & Hudson, 2007

(…) For some time I have been interested by the progress in the mining industry which affects the native population, the « Adivasis ». Meanwhile farmers, whose situation declines with each passing year, are no longer a priority for the authorities who concentrate all their attention on the industrial and service sectors. For cotton farmers the 'steamroller' is the liberalization of the agricultural markets.
China has its Mingongs. India has its Adivasis (Natives), its Untouchables (Dalits), its OBCs (Other Backward Classes) and its farmers. Despite the rights and constitutional protections given since Independence to these people, contempt, lies and exploitation are rife.
These « second zone » populations harvest the abundant rotten fruit of economic development, surviving far from the golden bubble of the rapidly metamorphosing cities.