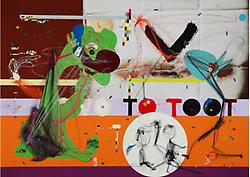 In the Swiss spotlight

Art Basel, the annual contemporary art fair held in the Swiss town of Basel, will be on from 16-20 June, featuring over 300 galleries from 36 countries which will show works by 2,500 artists. The five Indian galleries invited to the prestigious event are Sakshi, Chemould, and Chatterjee and Lal from Mumbai, Nature Morte from Delhi and Gallery Ske from Bangalore. Four of the invited Indian artists share the works they will be showing with Lounge and describe them in their own words.

Suhasini Kejriwal
Nature Morte, New Delhi
Garden of Unearthy Delights II, 2009
20x18x6 inches, fibreglass and acrylic paint size
The work is part of a series of artworks that were exhibited in a courtyard garden setting, featuring plants with human body parts such as hearts, brains and eyes. The idea first came to me when I saw an exhibition of preserved human body parts, done in a manner that didn't shock you. The clear reference to surrealism is there in the dark yet playful manner of treatment.

Thukral and Tagra
Nature Morte, New Delhi
Life Cycle 1, from the series The Dawn of Decadence, 2010
86x110 inches, oil on canvas
The new painting is part of our ongoing project called "bose dk", which is a line of tongue-in-cheek products where labels become art and the art is in the labelling.
This large-scale painting pictures a universe composed entirely of personalized products, where consumerism takes on monstrous proportions.

Aditya Pande
Bose Pacia, New York
Heard, from the series Heard, Said, Meant, 2009
36x48 inches, mixed media
Four actors play across these works. There is an implied dialogue between the protagonists, the viewer and their environment of photographic/digital/drawn reality with the word "two to toot" being repeated continuously like a chant. Repetition makes the words exist as sound and as graphic image.

Nikhil Chopra
Chatterjee and Lal, Mumbai
Yog Raj Chitrakar, Memory Drawing X, Part 2,
Stills from the performance at the Bhau Daji Lad Museum, 2010
The Bhau Daji Lad Museum was earlier called the Victoria and Albert Museum and, with my performance piece there, I wanted to critically examine the history of the building and the museum it houses, while also archiving it in a way. Moreover, I wanted to inhabit a space that has been immaculately restored, with a fantasized version of the self. At Basel, we will show videos and photographs of the performance, as well as objects related to it such as drawings, costumes and dresses.